Saturday morning 6am, Christopher and I set out to a hike. He has been on many hikes with me, with the exception of a few tough ones. That being said, we were prepared with plenty of food, water and warm winter gear to introduce him to some tough rugged terrain. I wanted to throw some elevation gain and push him a little, without the loss of enjoyment and enthusiasm. He can do some distance, the most have been 12miles RT. I was determined to not discourage him, or else he would have no desire to return. To climb a mountain, or go up to the peak is no easy task. Endurance is put to the test, making the statement PUSH FOR THE PEAK sometimes the hardest, as you are walking straight up!

Our destination was the Icehouse Trail in Mt. Baldy. Icehouse Saddle is 3.6 miles from trailhead and gains 2,600ft. A few miles into the trail, you enter Cucamonga Wilderness, and a permit is required. Mt. Baldy Village visitor center provides this permit, simply have to go to office. You can also call ahead and have one ready at the message board, very convenient if you are looking to start before sunrise.

I was uncertain of the distance we would hike, therefore, stopped at Baldy Village and picked up a permit. However, I was more than  happy with the fact that Christopher  was up for the challenge.

All packed and ready to go, I looked at the time, 8:15am. As we started our hike, it was very cloudy and chilly. I had been advised by a friend of mine of a storm said to start later in the afternoon. Though we both had rain gear, I did not want to get heavy rain coming back down the mountain, not with Christopher. 11:30am was my turn around time. From beginning of trail, the steepness at some parts can not be overlooked. Christopher was feeling it and quickly began looking back to see how far we had walked. He looked at me, and with a look that said WHAT DID I SIGN UP FOR? smiled and kept going. Throughout the entire hike he was all smiles. After about half mile, he requested his first snack, SCOOBY GUMMIES; which according to him, gives him energy. He sat on a rock, enjoyed the gummies, and off we went. As we were walking, clouds begun to move in on us, and we found ourselves unable to look past 100ft ahead of us. The clouds also brought along very little mist.

Along the trail flows a small creek stream, and due to recent rain, was flowing nicely. Christopher’s  weakness is a river. He loves ‘HELPING the water, it will make it go faster and reach farther,’ his exact wording.

Every few hundred feet, he would ask me to stop and go EXPLORE. “No, we have a long way to go,” was my answer. “We will help the water on our way back.” That did not stop him from slowly going off trail and making his way towards the river, even though the trail was right in front. His perseverance was strong, and finally he said, “ok, this is it, I need to explore!” as he walked off trail straight to the river. Halfway he stopped, looked back and just smiled, “come on” he said and waited for my response. Serious face at first, just had to give in and couldn’t help smiling back, “fine, let’s explore a lil.”

He jumped over a small river stream, removed some logs from water, and after about 10 minutes or so, he was ready to go.

As we continued going up, the steepness level was increasing. Our first official break  was at the mile marker, which is a junction of the Chapman Trail, turning north taking a route thru Cedar Canyon. Our backs felt good with no packs. Christopher had some SCOOBY gummies, a snack, and drank plenty of water. Many hikers passed by, all amazed at Christopher’s determination and mainly his age, 5 1/2. “great job, keep pushing,” most told him. 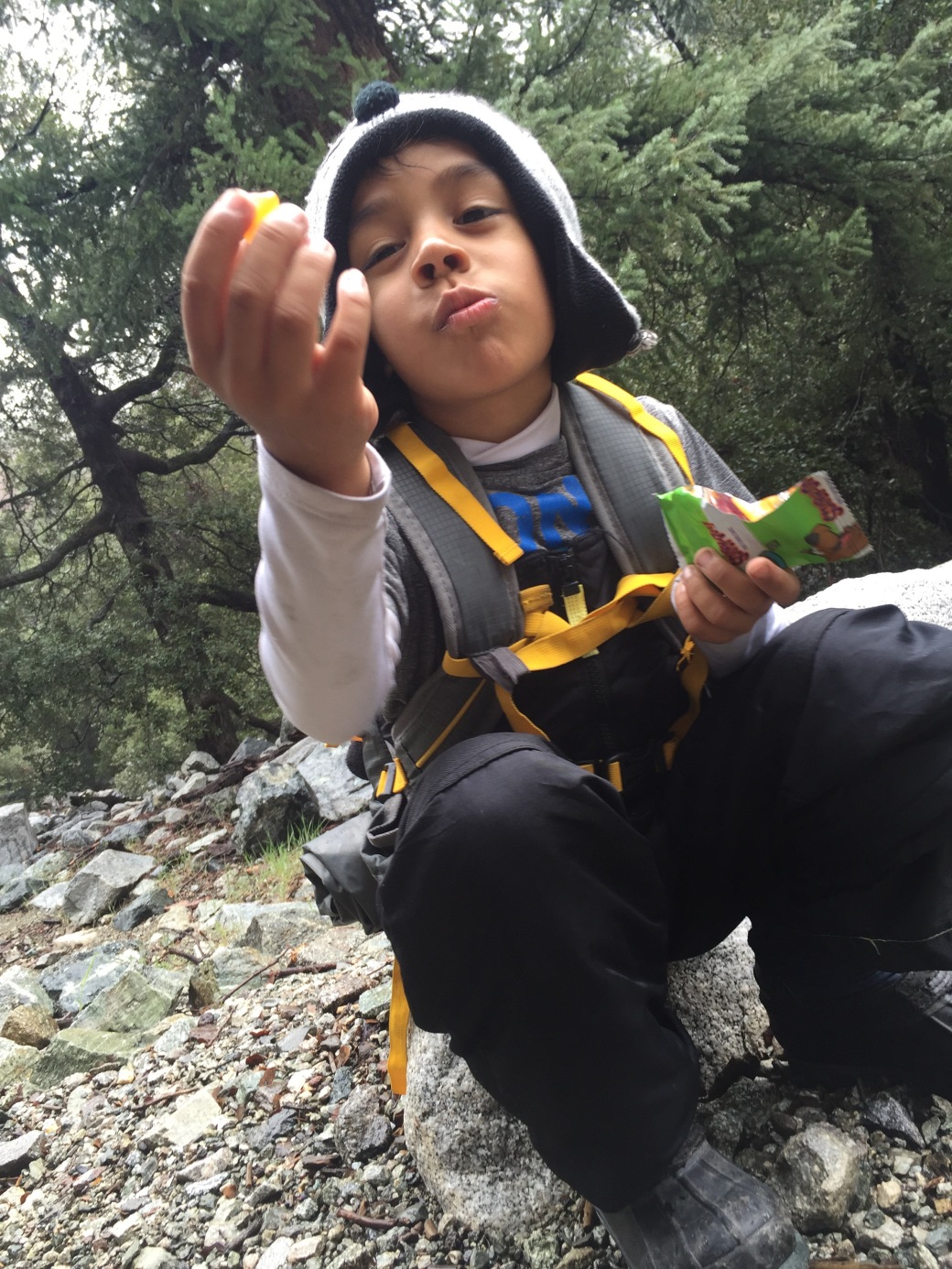 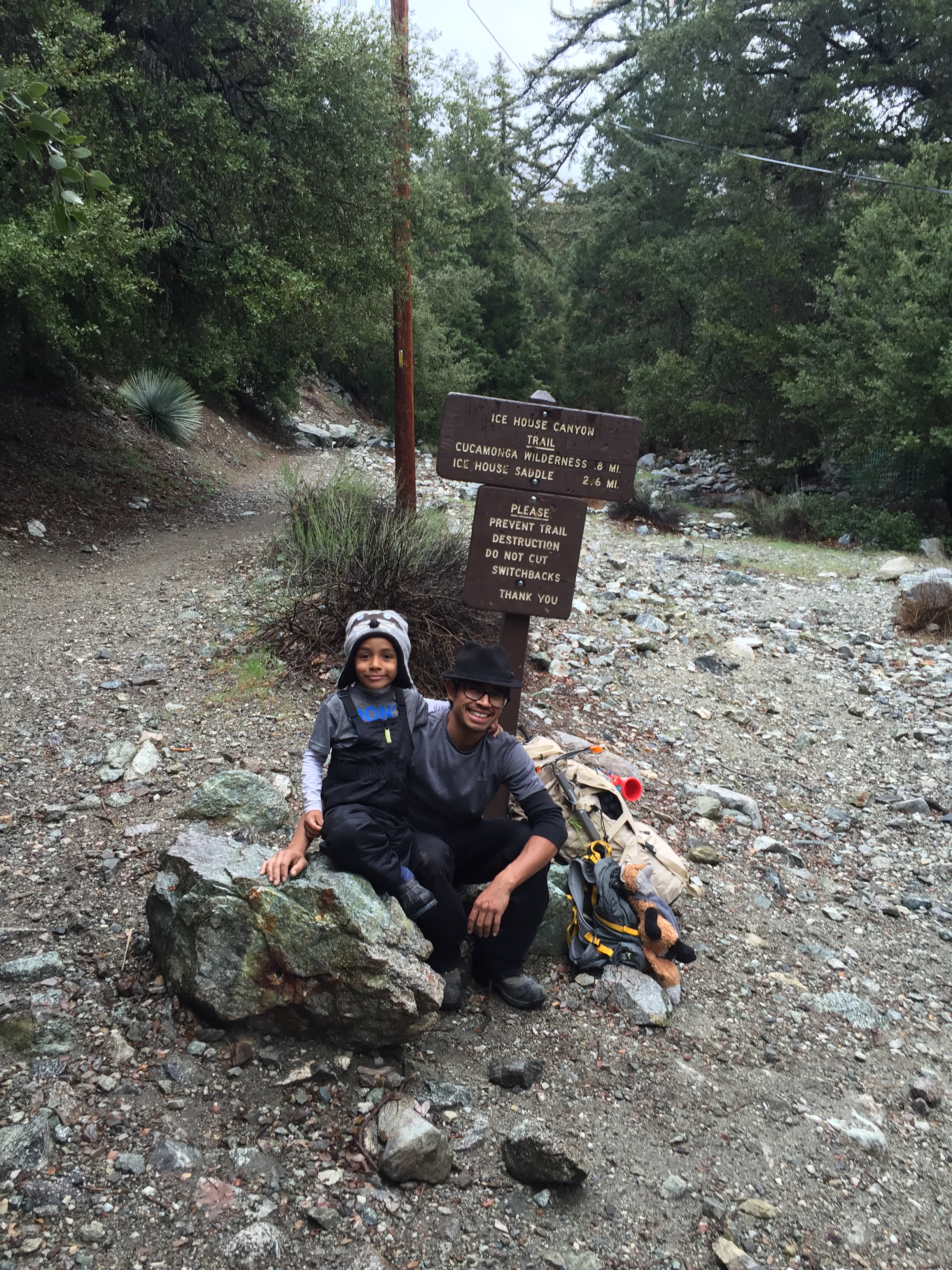 That seemed to motivate him, grabbed his pack and said, “come on, let’s catch up to them.” Our 15minute break came to an end and we continued our hike. As we tried to catch up to them, the steepness gradually kept increasing. Christopher decided to make up songs and count, as to keep his mind occupied. That worked wonders and though we did not catch up to the hikers he wanted, we advanced quite a lot.

At 1.8miles from start, you reach the Cucamonga Wilderness, here we unpacked for another break as we were hungry. A cold salami sandwich was our meal, I drank water, Christopher had fruit punch flavored water. I snapped a few pics while Christopher explored. The trail was foggy and dark clouds roamed ahead of us at all times, with occasional mist. Our bodies cooled down while sitting, and we could now feel chills. Jackets were put to work. As our trek continued, to what I estimate about 2.4 miles one-way, rain started getting heavy and more consistent. Hikers going back told us the Saddle was just about 1mile, “almost there,” they all said. However, the time was now 11:15am, and Christopher was exhausted. 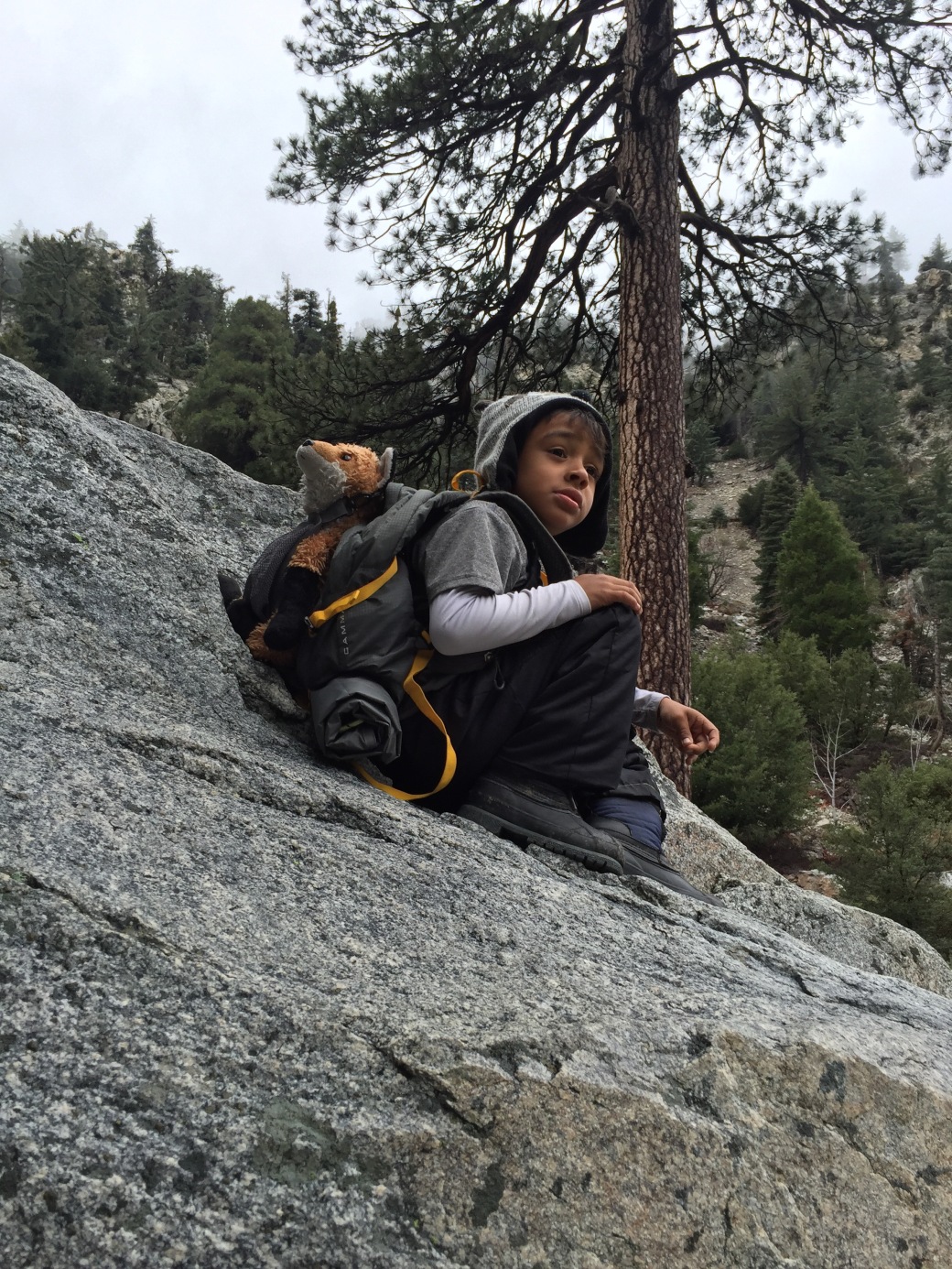 The trail only kept getting steeper, which meant a lot more time was needed, that is if he still had energy. Christopher’s determination was very strong, and though he was tired, “let’s make it to the top” he said! I quickly reminded him that we still had to explore the river, that worked, he was very excited about that. We sat for a little while, tossed on our rain jackets, and enjoyed some blackberries before descending. The way down was much quicker, at some parts Christopher found himself running down the trail, then stopped to catch his breath for a few secs, and continued. Around 12:20, already past the hardest parts of the trail, Christopher decided to opt from the trail and follow the stream of water. Looking for a nice spot to have lunch, and for me to set up my hammock.

Along the river, we found lots of little waterfalls, and a few logs begging us to cross ’em. Finally reaching ‘the spot ‘ Christopher took off his pack and quickly started removing rocks and logs from water. His goal is to help the water reach the river bed by our house(in Downey) so he can continue to take long showers. Rain drops were now very small, and I was able to set up hammock and prepare lunch. Hammock was set up, Christopher took over. He was swinging and as I jumped off the hammock, my phone jumped out of my pocket; landing screen down on a rock. Phone was fully functional though screen was cracked. First thought, the wife is going to kill me! I wasn’t going to let that ruin our trip, everything continued as if nothing had happened.

We had lunch, BEEF MEAT; and luckily as we were done eating, rain forced us to pack up everything. Well rested, bellies full and rain jackets on we continued our trek back to the parking lot, about 3/4 mile to go. Extremely exhausted, Christopher would occasionally bend down, hold his stomach and catch his breath. Back at the car, rain still strong, packs came off and so did the soaked rain jackets. Christopher had thermo pants under snow bib, so, those came off too.

Overall, it was a great hike! New experience for Christopher and I, and best of all, we had a FANTASTIC bonding time. As usual, Christopher is always talking, even when out of breath!! I was very happy and satisfied with the outcome of this (training) hike. We will attempt to reach the Saddle again, however with an earlier start. Or maybe no rain on forecast. 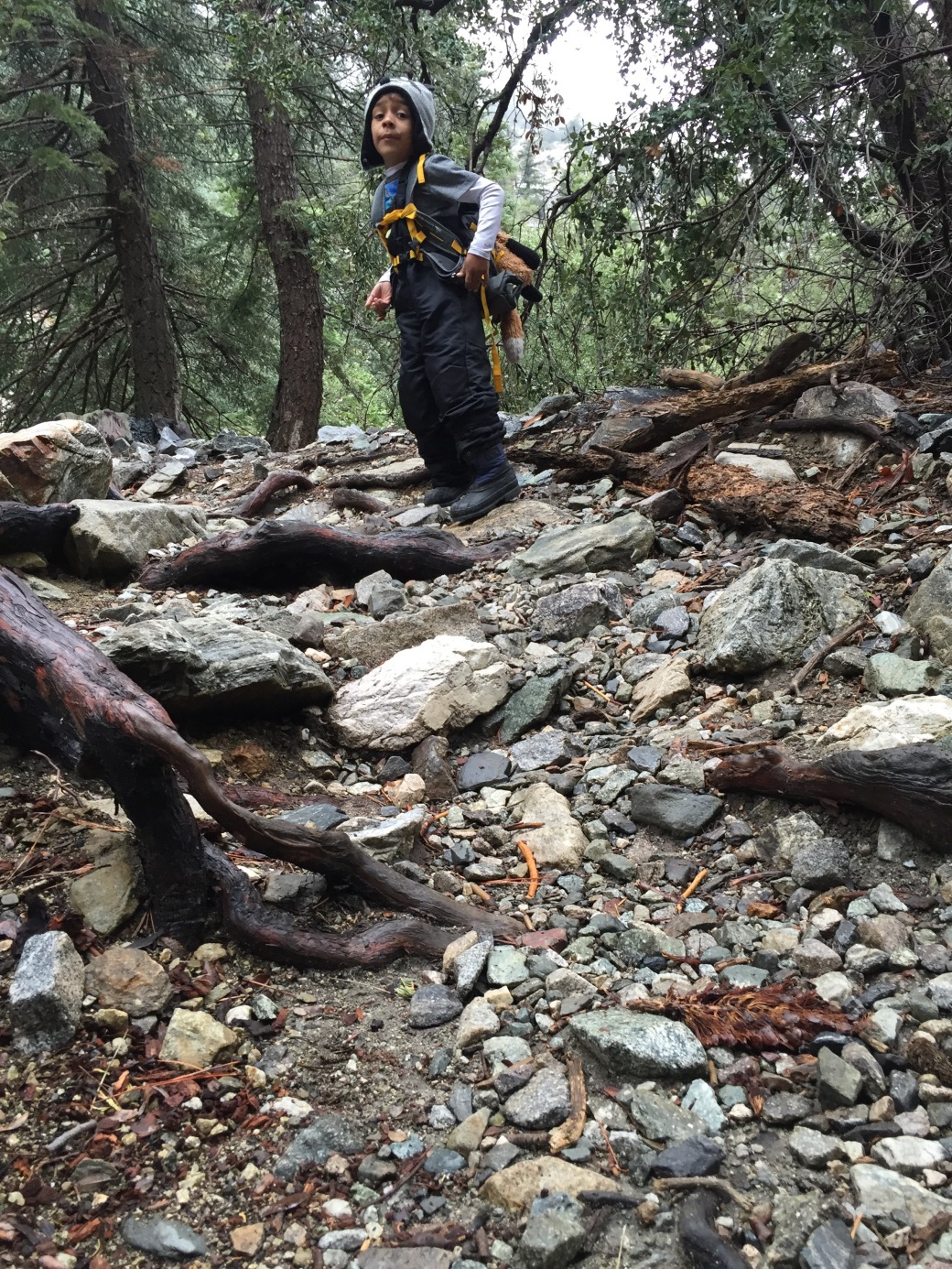 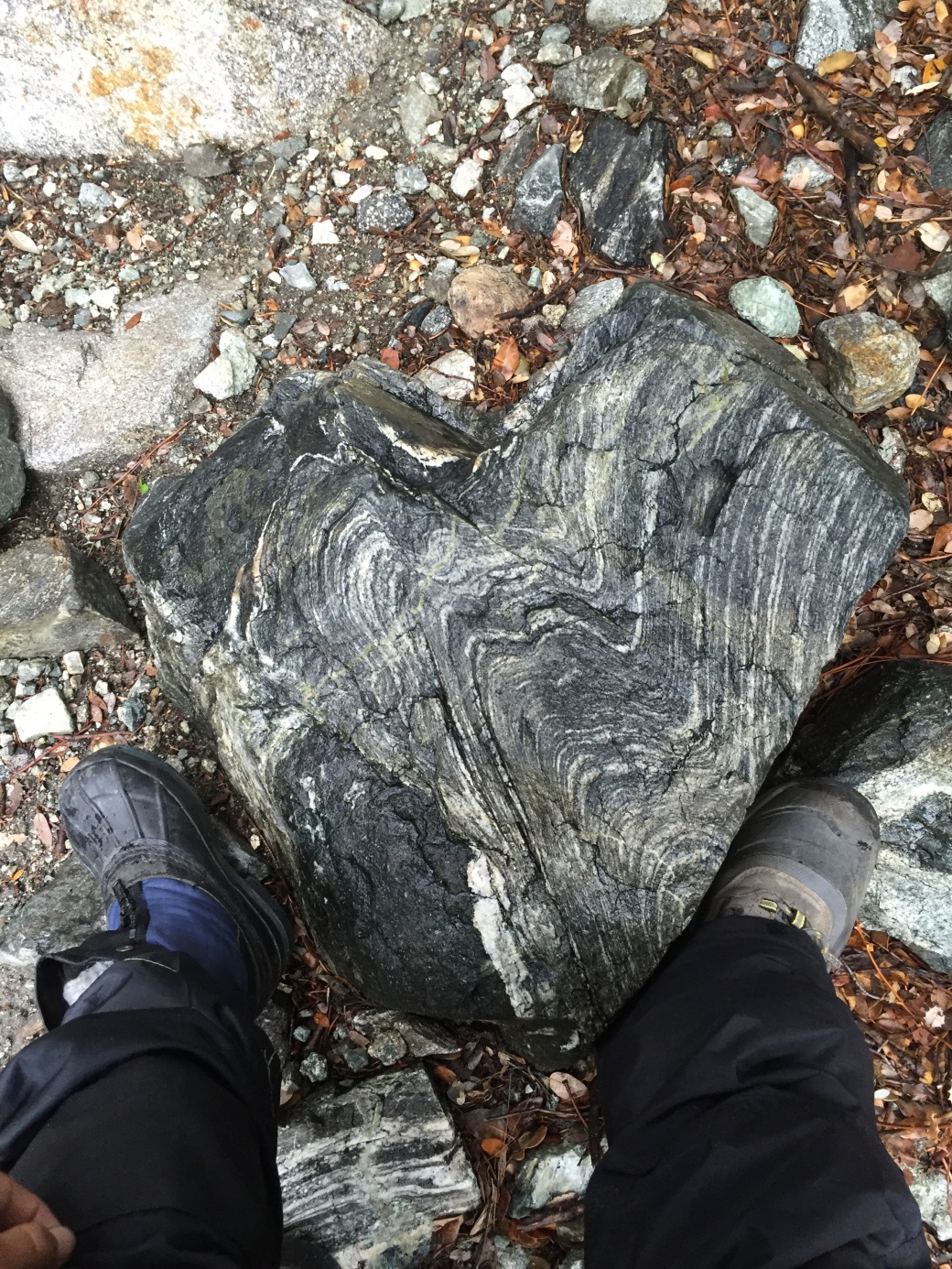 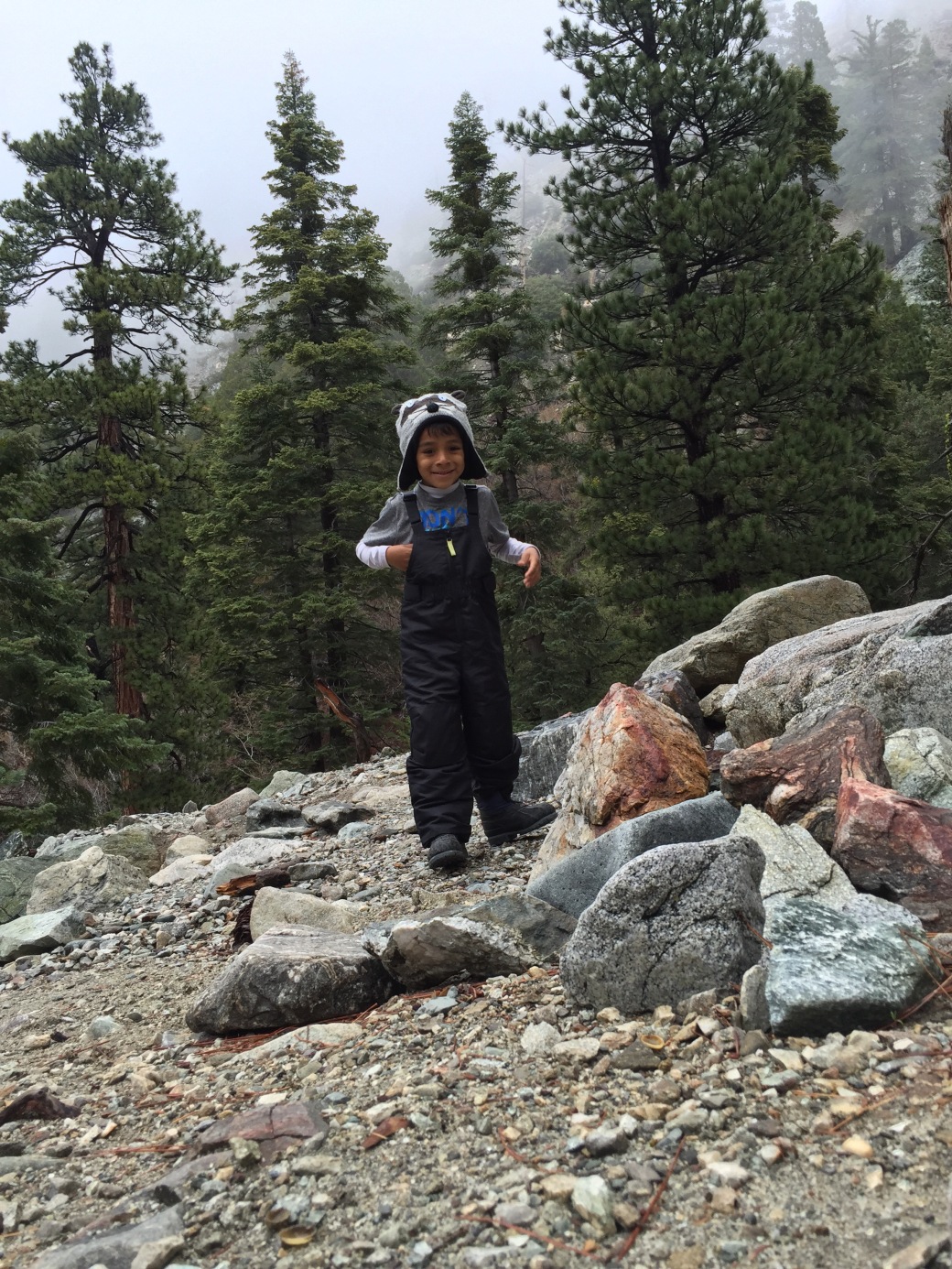 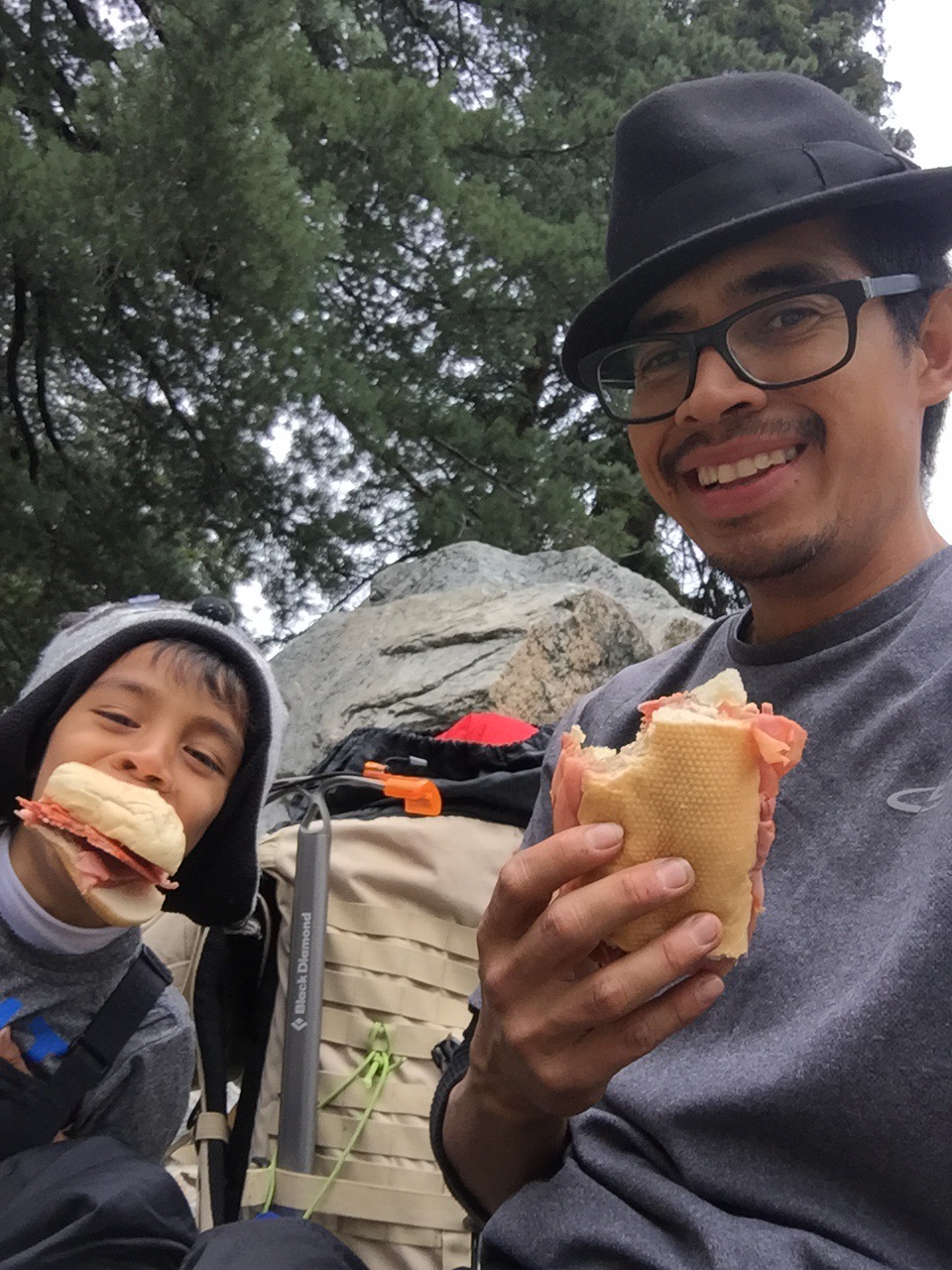 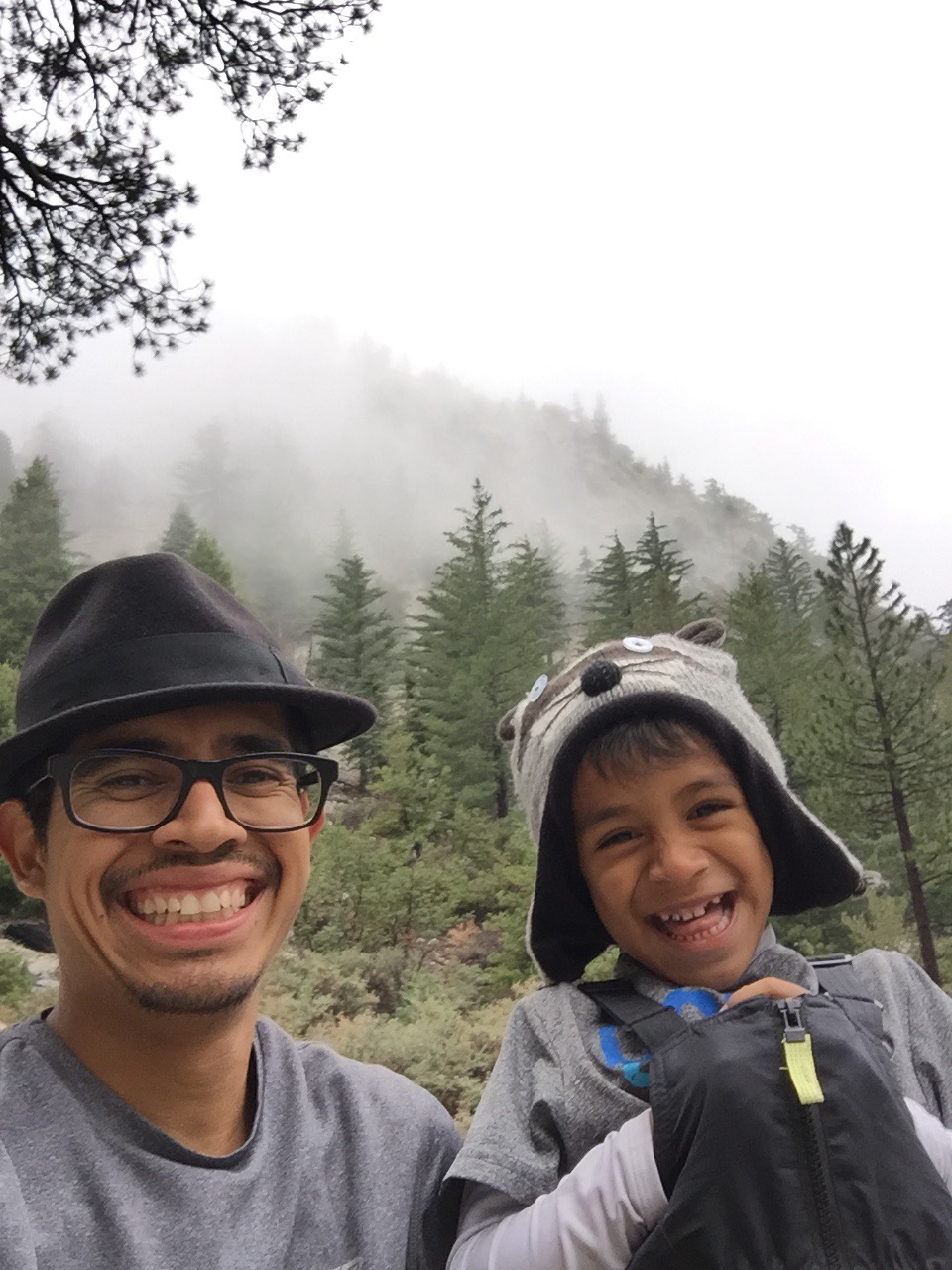 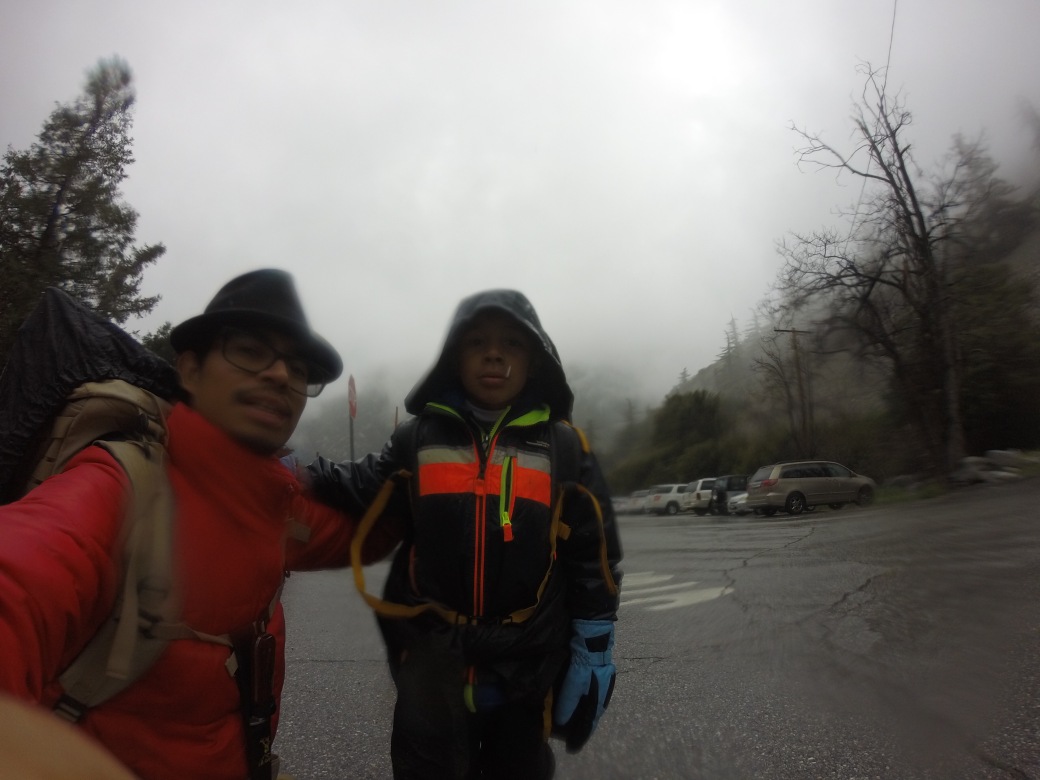 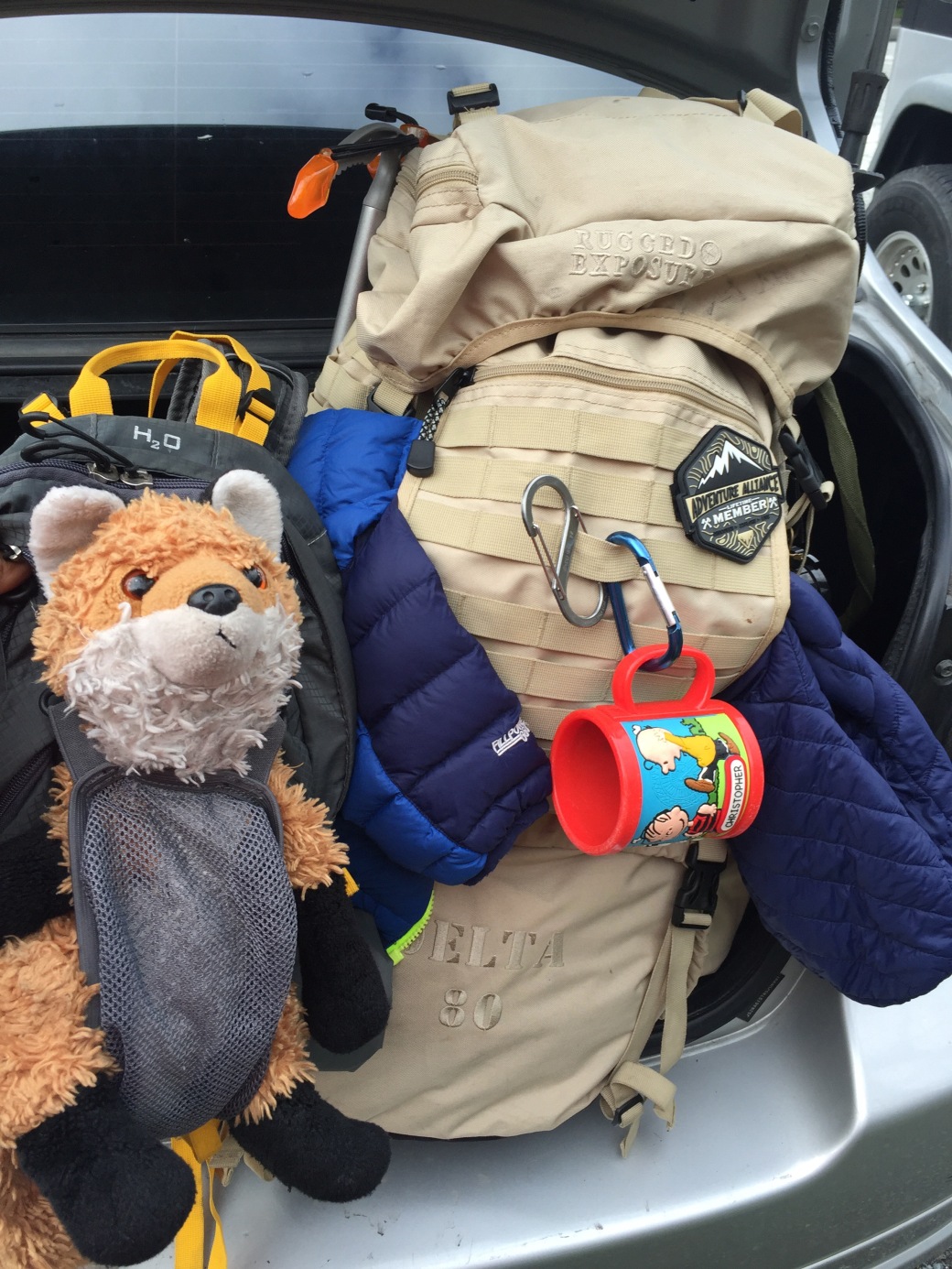 2 thoughts on “Endurance Knows No Age”